In Chiapas each town seems to have a unique style of weaving and costuming, and a unique way of celebrating its history and culture.

Our first stop was Chiapa de Corzo, the oldest Spanish settlement in the region, and best known as the access point for tours of the beautiful Sumidero Canyon, carved through the hills over centuries by the Grijalva River. The most impressive part of the canyon is just a short distance from the boat launch in Chiapa de Corzo. The entire tour takes just over an hour.

But Chiapa de Corzo is also famous for its Parachicos Festival in late January, a celebration of the Feast of St. Sebastian. Sebastian, was supposedly martyred by many arrows, a vivid imagery of suffering that resonates with the indigenous people here. They identify with his story of pain and oppression.

Chiapa de Corzo from the banks of the Rio Grijalva

The festival is said to originate with a legend of a woman whose child was deathly ill. She was told to seek the services of a native healer in Chiapa and moved there with her household. She followed the healer’s directive to bathe her son in the water at Cumbujuyu for nine consecutive days. When the child recovered, she showed her thanks by giving food and gifts to the poor, and her servants danced for the entertainment of all the children, or “para chicos”.

The modern celebration includes massive processions, the people dancing through the streets, pressed cheek by jowl. Traditionally men of the town dress as women, representing the mother in the legend, a decided twist on Spanish machismo! The parachicos, representing the servants, dress themselves in masks with the features of Spanish saints, distinctive round wool headpieces and colorful serapes. They shake rattles called chinchines. The processions last for hours and climax at the church, outside of which is a sacred ceiba tree, which, in Maya mythology, represents the juncture between heaven, earth, and the underworld.

The next day is Sunday. It is very cold in San Cristóbal de las Casas where we have spent the night. Just a few kilometers away is the famous town of San Juan Chamula. Chamula is an autonomous region, with its own law enforcement and judicial procedings, independent from the state government. The vast majority of the inhabitants here speak primarily Tzoltzil, one of 33 Maya languages still spoken in Mexico by over four million citizens. Chamulans are suspicious of outsiders, though they value tourist dollars brought to their economy. Inside their church, for admission to which one must pay an entrance fee, photos are not allowed, a proscription that is assiduously enforced by a large posse of townsmen in sheepskin coats. Anyone caught with a camera is ordered to delete photos and escorted out of town!

The centerpiece of San Juan is the church. In many ways the church sports the trappings of most any parish church. Inside the entrance is a large baptismal font, though there is a plastic sheet covering it which suggests limited use. On a side wall, as well as in the chancel, there are large retablos, but they are strangely devoid of paintings or sculptures. On the walls there are found no crucifixes, but green Maya crosses are abundant.

Entrance to the Church of San Juan Chamula

The nave lacks pews, but the marble floors are strewn with fresh green pine needles that are raked and replaced continuously. The smell of the pine sensuously entwines with the smell of burning copal, the incense that signifies prayers rising to the heavens. A soft murmur of chant engulfs our every step. At the edge of the space there are long rows of glass-fronted cases housing statues of saints, each clothed in meticulously fabricated gowns. The names of the saints are inscribed above the door of each case. In front of these rows of saints are large tables, crowded with votive candles of varying sizes and shapes, all lit - thousands of candles.

But do not be fooled by appearances. These are not your regular Catholic saints, for the religion of San Juan Chamula is a unique blend of precolumbian belief systems and a veneer of Catholic piety. The people revere the spirits of nature, the gods of their forefathers. The saints behind glass are synonymous with, and revered as, indigenous deities.

Near the front door an entourage of litters awaits to transport each saint in its turn from the church to the square and around the town back to the church. As we arrive, a procession has formed. Musicians playing crude, un-lacquered instruments - violins, harps, drums and vertical flutes - are accompanied by pilgrims carrying candles and hoisting a litter atop which is one of the sanctoral cabinets. The sound is coarse, almost mournful, and there is little attempt to pull either the sound or the steps of the pilgrims into synchronization. Waiting townspeople join with the procession once outside the church.

Scattered about the interior are groups of suppliants, some adults, some children, placing candles of various colors and heights in carefully aligned rows. Many groups include one or more people chanting a prayer litany as the candles burn. The candles are lighted and left until they burn to the ground. Sextons with scrapers appear, remove the masses of melted wax from the floors, and toss fresh pine needles on the marble. Scattered around the church are healers who make prescriptions with respect to numbers, sizes and colors of candles, prayers to be recited, etc.

Most people have large bottles of coke, pepsi, or pox, (pronounced “posh”) the local spirit of choice, made from fermented sugar cane, in front of them. Some take swigs and then spew the liquid across the lighted candles. Others drink hoping to belch, considered to be purifying expression of faith. The overall impact is intense, and one senses that they have briefly shared in the most vital rituals of this ancient community.

But the people of Chamula also like to celebrate in more raucous ways, as we were soon to discover in the neighboring town of Zinacantán, where the local garb is brightly colored, with heavy floral embroidery and large tassels. We approach the festival at Zinacantán through a gauntlet of booths selling traditional wares, from marquesitas, pizza, churros, and cotton candy to fabrics, clothes, and toys. A large sound stage is erected on one side, giving every indication that celebrations that will extend well into the night.

The church at Zinacantán is much smaller than at San Juan Chamula, but the rituals inside are very similar - pine needles, incense, candles, prayers and coke. In front of the church, surrounded by throngs in traditional garb, are children and adults in bright carnivalesque costumes with pullover masks bearing designs that evoke superheroes, but that also resemble the faces of Maya deities we saw on incense burners in Palenque. Others feature exotic costumes with grimacing masks and feathers, while still others have simpler costumes and austere masks with catatonic European features like Franciscan sculptures. Like everything about this festival there is a blending of old and new, indigenous and conquerors, ritual and celebration. 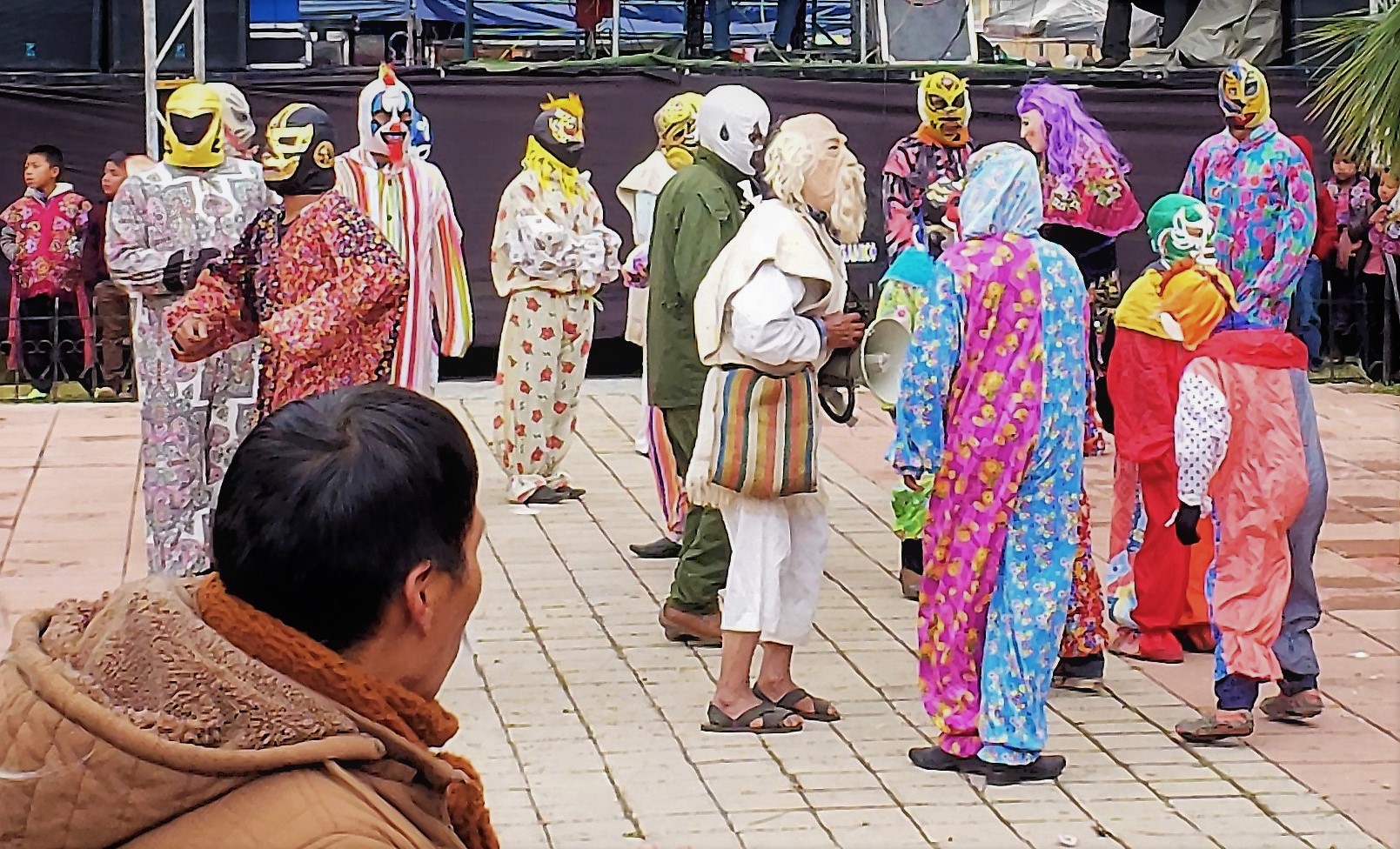 (Above, left to right: vendors awaiting festival goers / the band approaches the church / revelers in costume - note the varieties of masks / a more traditional costume / the newly lit kameró begins its rounds / fireworks explode as the candles burn down)

As the band approaches the church, revelers surround the procession. The three levels of town officials, charged with organizing and realizing the festival, and with teaching the traditions to the youth, have privileged positions and costumes. The parade is soon joined by kamerós, costumed adults bearing metal frames over fire-resistant shells in the likeness of animals. The frames of the kamerós are wired with fireworks and lined with tapers to serve as fuses.

Fireworks towers in the square.

Once lighted, the kameró, preceded by a reveler with a bullhorn, races through the crowd, the candles gradually burning down and igniting all sorts of explosions. It is a wild commotion with noise, flame and smoke. Children scream and race about as sparks fly in every direction. Once the fireworks are exhausted, another kameró steps up and the process begins anew.

On the opposing side of the square from the church stand large kinetic sculpture towers wired with hundreds of fireworks. The climax of the festival will surely be spectacular!

THE ART OF THE DEAL - Mexican style